David Hockney. 'A Year in Normandie'

In early 2019, David Hockney set up home in the Pays d’Auge, Normandie and embarked on a new chapter of artistic creation. A few months earlier, on a visit to the Musée de Bayeux for the first time in decades, he was moved by a tapestry of la Reine Mathilde, a 70 m long frieze relating the 11th Century Conquest of England by William, Duke of Normandy. The tapestry reminded him of ancient Chinese and Japanese painted scrolls and much as he had done in Yorkshire, Hockney was inspired to paint the arrival of Spring in Normandy in the form of a narrative cycle. ‘La Grande Cour’, his Normandy home, surrounding gardens and countryside became his subject matter; a stylus pen and an iPad his only tools.

In March 2020, a national lockdown was declared and In a matter of only a few weeks, Hockney created over 100 images. He had already been painting with an Ipad for some ten years, a technique which allowed him to work at a fast pace yet with great precision. In the style of the Impressionists, he captures the effects of light and subtle climactic changes with outstanding dexterity, using a vivid, bright, almost larger than life range of colours that feel wonderfully positive and oh so joyful. One is reminded of his pop-art LA pool images ‘Bigger Splash’ and ‘Pool with Two Figures” LA pool images from the late 60s and early 70s and this cycle of work feels so vibrant and refreshing with it.

Hockney’s house, ‘La Grande Cour’’s sits halfway down a valley overlooking the slope the other side – fields, trees, hedges are in abundance. Not a single house, farm, village or electric light is visible. The sea is close by, yet not visible. This is what David Hockney sought after in Yorkshire and this forced him to flee the coast to be in the ‘middle of the countryside’ as he puts it, to allow him to paint.

On the 1st of March 2020, Hockney started painting trees in their winter state. The arrival of a national lockdown was welcomed by the artist, allowing him to focus entirely on his work. Every day for 4 months he painted a single picture. Artists need solitude to be creative and not surprisingly the lockdown for many did have a positive side to it. As many of us felt during those surreal, unprecedented months, time stood still, a wonderful sense of freedom reigned. Artists are happy when they paint. Van Gogh was happy when he painted yet his melanchold remains too much the focus of attention today. Hockney is similarly happy when painting and one can feel that joy, that sense of freedom in this narrative of images.

Like the Bayeux tapestry, Hockney’s frieze is 70 m long and tells a story that requires the viewer to walk round from the beginning of Spring and back again. There is something reassuring in this cyclical sense. What goes around comes around. At end of the day, the clouds pass. It will be Ok. How uplifting

Hockney started off working on an iPhone but took up the iPad upon its introduction in April 2010, using the ‘Brushes’ app which allows the artist to achieve the same brushstroke effects as in oil and watercolour painting. Painting on an Ipad contrasts with paper in that the colour always remains fresh. On paper, after the 3rd or 4th coat, the paint darkens and loses its lustre. 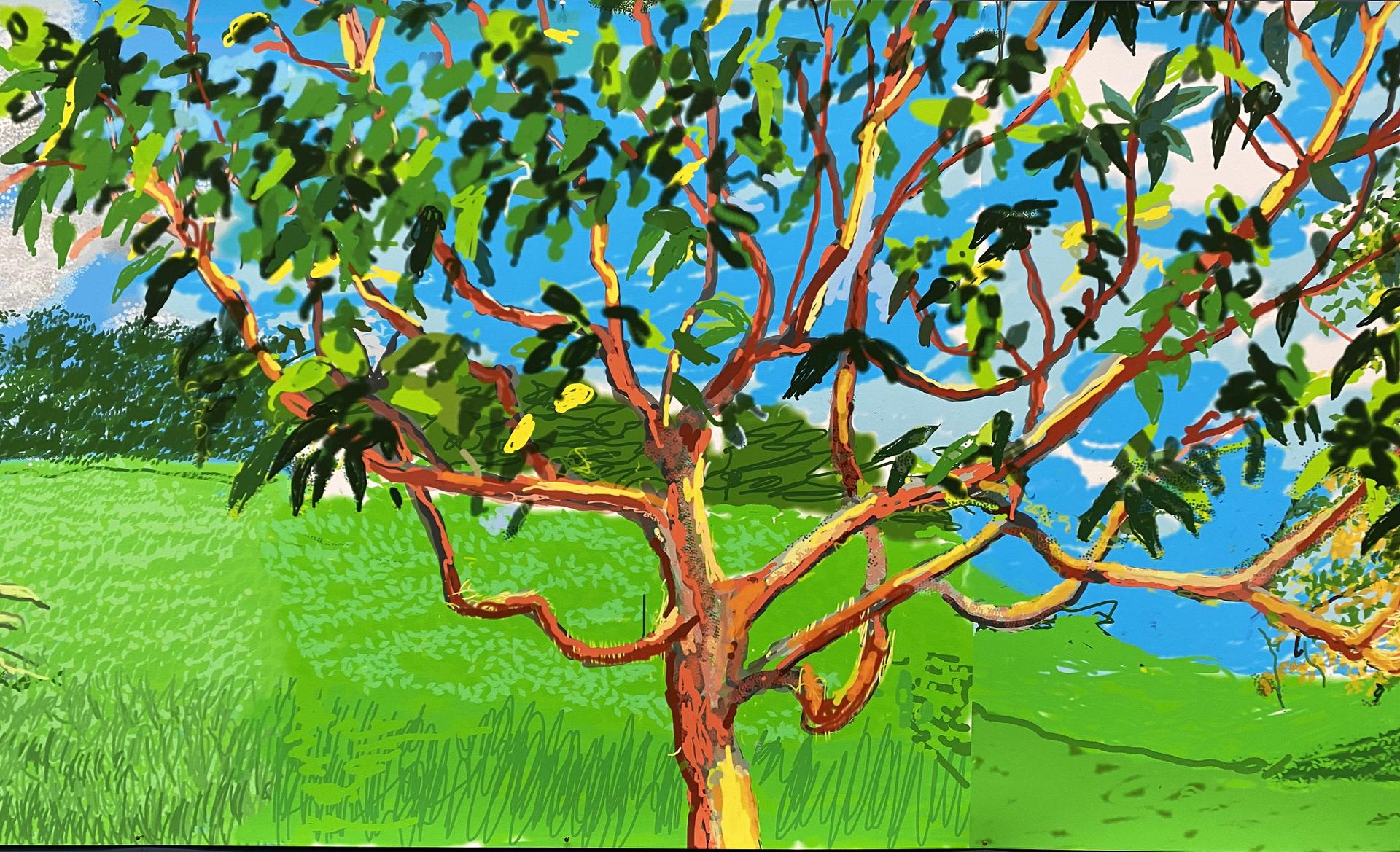 Hockney is passionate about recording the seasonal changes. A large cherry tree sits in his Normandy garden and his digital images trace its subtle changes as buds become blooming flowers and give fruit. How nature evolves varies from one season to the next. In Spring, changes are daily, leaves and flowers change. Summer sees less activity. One might be tempted to consider a passion for seasonal change as somewhat banal but for many, the Spring of 2020 was unique for so many as they watched spring from start to finish, day in, day out for the first time in their lives.

From ancient times and at least as far as the beginning of the 20th Century, Chinese and Japanese artists did not use perspectives, shadows or reflections in art. Hockney’s colours are intense and he uses colour to construct a sense of space, of perspective, a subject he has always been obsessed with. In the mid 19th Century, paintings were all created using a ‘chiaroscuro’ effect. By the end of the century, the technique had vanished. Why ? quite simply because of the influence of the Japanese who did not paint shadows. Western landscape painting is like a window view whereas Japanese landscape painting is like a walk amongst nature. The Japanese were only interested in the subject matter rather than details such as perspective. Shadows merely give a sense of the time and are thus of no interest to them. 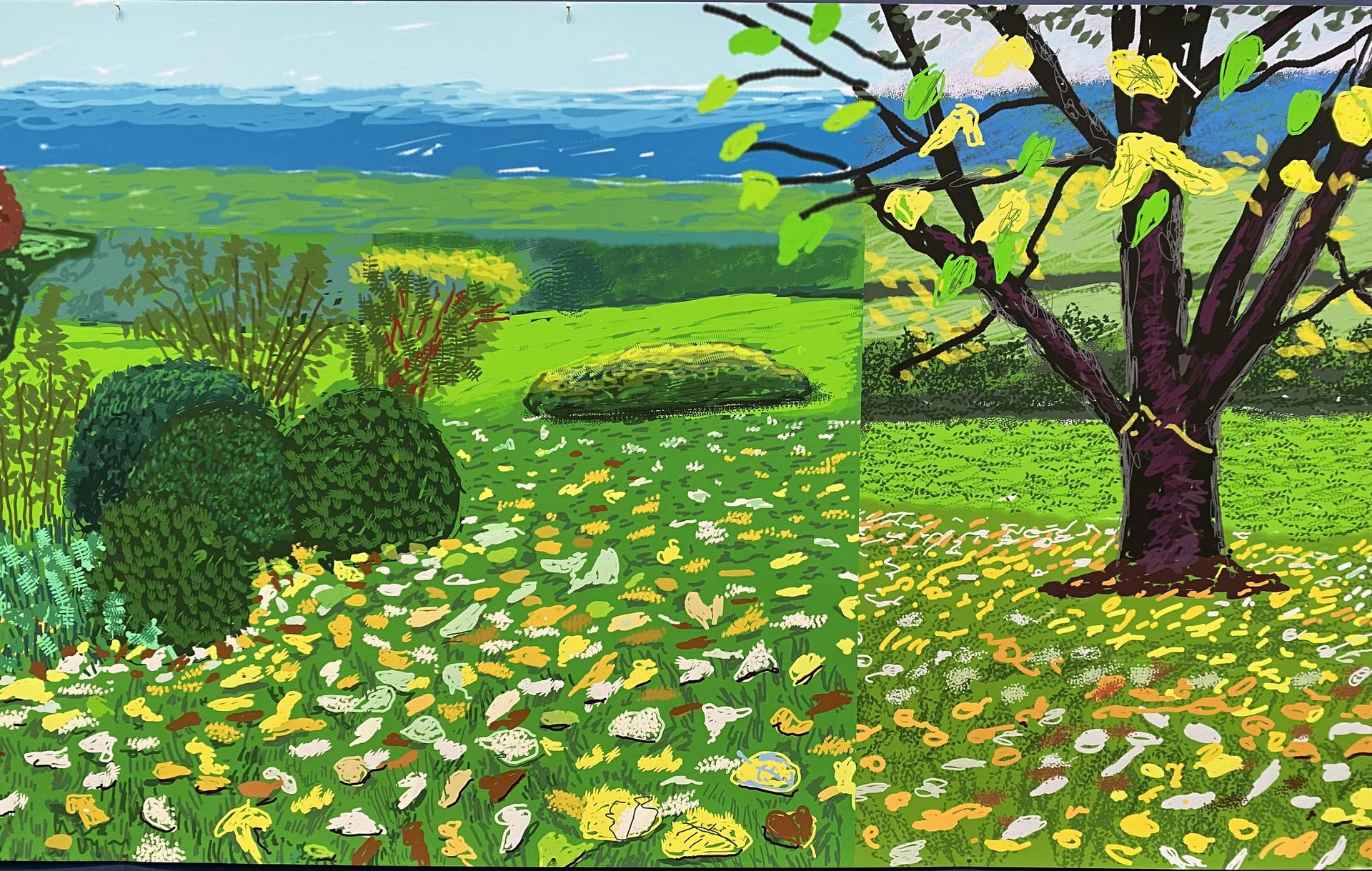 Hockney’s work it will come as no surprise is heavily influenced by Cubism and Picasso in particular. For the artist, the two are inseparable. The artist often talks about Picasso and recalls how when Picasso was in his 80s and at work in his studio he felt about 30. At 83 Hockney, has the same sentiment. His work allows him to forget his age. According to Hockney you need to feel that your work is essential, in other words you need to feel 'connected' to your work, to have a sense of genuine passion. Renoir similarly continued to paint and smoke in his 80s despite his arthritis. Something as essential as art allows you to detach from yourself and attain a supreme state. One of the reasons why we love art. We can escape for a while and travel into another world. Once certainly gets that sense looking at Hockney's works.